About the Center and Haneda Memorial Hall 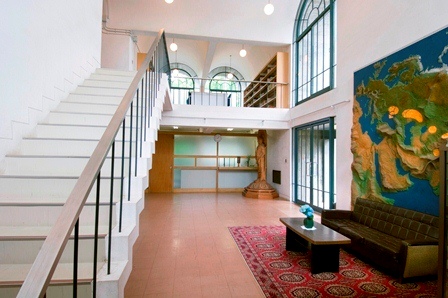 About the Center and Haneda Memorial Hall

The Center for Eurasian Cultural Studies was established in 2004, following the reorganization of the former Institute for Inner Asian Studies, founded in 1966. The Center is located in Haneda Memorial Hall (13, Omiya Minamitajiri-cho, Kita-ku, Kyoto), which was built to commemorate the late Professor Dr. Toru Haneda (1882–1955), who pioneered the academic study of Central and Northern Asian history and languages, promoting education and study in those fields, through the support of the Mishima Kaiun Foundation and the Takeda Pharmaceutical Company Ltd. The unique two-story building that imitates the architecture of Islamic seminaries is the work of Kyoto University Professor Tomoya Masuda (1914–1981).

I. Organization
The Center is managed by a Committee consisting of some ten members; approximately forty researchers serve concurrently as faculty members of Kyoto University or other academic institutions.

II. Fields of study and research methods
The center is committed to the development of multidisciplinary research related to the history, languages, and religions of Central Eurasia and its surrounding regions, emphasizing the philological enquiries that were a feature of the former Institute for Inner Asian Studies. In addition, research based on fieldwork is also undertaken.

1. Historical studies
Given the tradition of source-based historical investigation established by the Institute for Inner Asian Studies, the preferred research method involves a thorough examination of historical sources written in various languages (including the Iranian, Semitic, and Altaic languages), in addition to Chinese materials. The Center encourages links between individual research projects in order to promote the study of human history in Central Eurasia and the surrounding regions.

3. Religious studies
As well as the major religions of Islam, Buddhism, Christianity, and Taoism, the people of Eurasia have embraced various minor religions including Manichaeism. The role of these religions in local communities is being comprehensively investigated, mainly through the exploration of old documents written in native languages.

III. Publication of research results
Semiannual meetings on Eurasian studies, launched in 1980, are usually held in July and December. The 73rd meeting was held in 2014. In addition, special academic meetings and lectures are occasionally offered, attracting scholars of Eurasian Studies from both home and abroad.

IV. Educational activities
Courses on Old Eurasian languages are occasionally held at the Center in order to train junior researchers.

About
From Our Dean
History
Staff Only (in Japanese)
Getting to Campus
Contact
Attached Facilities
Library of Graduate School of Letters, Kyoto University
Center for Studies of Cultural Heritage and Inter Humanities (CESCHI)
Haneda Memorial Hall
Center for Applied Philosophy & Ethics (CAPE)
Asian Research Center for the Intimate and Public Spheres (ARCIP)

Division of the Joint Degree Master of Arts