David Lewis’s pair of papers on “Desire as Belief” (1988, 1996) argue that desires and beliefs about goodness can be shown to be distinct when they are formalized in decision theory. This has faced criticism (Byrne and Hajek 1997, Bradley and List 2009) over what Lewis calls the Invariance Assumption. We show that even without this assumption, a triviality result against DAB can be proved. And when Invariance is assumed, the same result can be proved in a way only depending on what Velleman (1992) calls “The Guise of The Good”: that if somebody desires something then they believe it is good; Lewis’s triviality theorem is obtained from this result by further assuming the converse conditional (if something is believed to be good then it is desired). 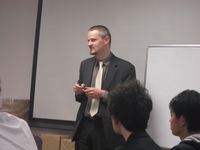 If we distinguish phenomenal effects from their noumenal causes, the former being our conceptual(ized) experiences, the latter their grounds or causes in reality ‘as it is’ independent of our experience, then two contradictory positions with regards to the relationship between these two can be distinguished: either phenomena are identical with their noumenal causes, or they are not. Davidson is among the most influential modern defenders of the former position, metaphysical non-dualism. Dharmakīrti’s strict distinction between ultimate and conventional reality, on the other hand, may be one of the most rigorously elaborated theories of the opposite position, metaphysical dualism. Despite this fundamental difference, their theories about the connection between phenomena and their noumenal causes are surprisingly similar in important respects. Both Dharmakīrti in his theory of ‘apoha’ and Davidson in his theory of ‘triangulation’ argued that the content of words or concepts depends on a process involving at least two communicating beings and shared noumenal stimuli. The main point of divergence is the nature of classification, but ultimately Dharmakīrti’s and Davidson’s conclusions on the noumenal-phenomenal relationship turn out to be complementary more than contradictory, and an integrative reconstruction suggests a ‘middle path’ between dualism and non-dualism.